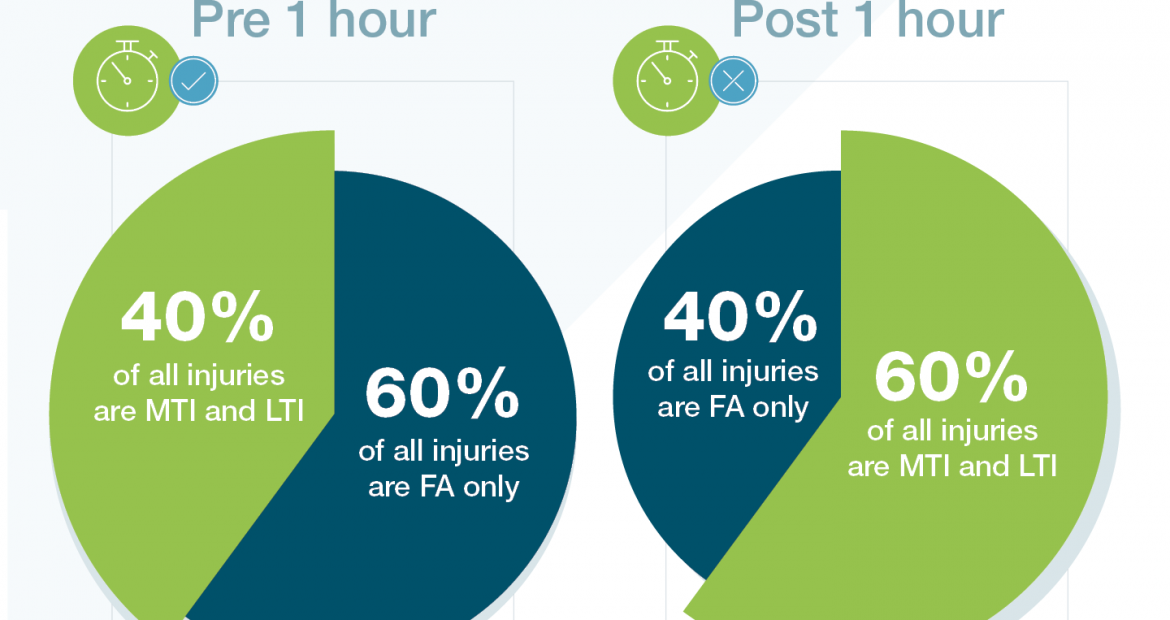 Probably not the first thing that comes to mind when discussing return to work after an injury.

But it should be. After 12 years, I still remember David Sagar, the then CEO of IPAR, telling me ‘return to work is an emergency’. At the time, I was fresh out of university, having just spent four years studying Occupational Therapy. It was the first job interview of my career. David interviewed me a mere two days after I’d handed in my final assignment, and to be honest, I was a bit confused by what he said. What did he mean by emergency? Clearly, he knew what he was talking about because, while IPAR was relatively small at the time, he is now the Executive Chair of market-leading MedHealth, and IPAR is a national provider of Occupational Rehabilitation services.

And he was right. Return to work is an emergency. Why? Because being off work due to an injury has a significant impact on the health outcomes of the person who’s injured. Crucially, the longer they’re off work due to injury, the less likely they are to return to work. Ever. The stats paint a dire picture. The 2011 Australian and New Zealand Consensus Statement on the Health Benefits of Work highlighted the harmful effects of being off work due to injury. Absence perpetuates itself: the longer you’re off work, the less likely you are ever to return.

If you’re off work for:

Imagine you suffered an elbow injury at work and there was zero support like a hotline to report your injury, seek return to work advice, and receive referrals for you to get early intervention treatment. Then because you’ve had no help or support or early intervention, you continue to work unrestricted and instead of getting better, your injury lingers to the point where you favour your other arm and have difficulty grasping objects with both your hand. Two injuries for the price of one.

At this point, you report the injury to your employer, and your doctor tells you to completely stop using your hands and take time off work to “rest”. One unfit certificate turns into two, and you are off work for a month. And like that, you’ve surpassed the 20-day mark. You’ve joined three out of every ten people off work for 20 days who will never work again! Ever.

So, where are the sirens and ambulances?

These figures show how crucial it is for an injured worker to be supported with their injury when it happens and to return to work as soon as possible, even if it’s not at full capacity. So, what’s causing the delay in supporting injured workers get safely back to work? And how does Cogent Thinking’s early intervention approach help close this gap?

Return to work for injured workers often gets delayed for several reasons.

Firstly, it’s not easy to track injuries for employers with large geographical footprints and dispersed multi-site workforces. Internal return to work teams are often responsible for managing multi-state jurisdictions, insurance companies, claims, and return to work all in one.

Add to this the issue that recruitment for experienced internal Injury Management Advisors is exceptionally competitive and expensive! Employers compete for talent against insurance agents, other employers, WorkSafe, occupational rehabilitation providers and the NDIS, where a graduate Occupational Therapist can pick up eye watering contracts.

But it’s not just a competitive employment market that’s making it hard for employers. When working in the Occupational Rehabilitation space I would use the same lines on repeat when supporting injured workers:

“You have to focus on yourself and what you can do to recover.”

These reassurances were for injured workers that didn’t have early support soon enough. All too often, injured workers expressed their frustration to me about not being supported when their injury occurred. They would tell me “I have worked for them for X number of years!” and this was the first time they’d ever heard from anyone after being injured, other than being told how to submit a claim. Another regular complaint from injured workers was “my manager has not even called me yet”.

These injured workers had one thing in common, their employer did not have the bandwidth to support them, and the reliance fell onto busy WorkCover Claims Agents who have a large number of competing demands including eligibility, payments and mountains of paperwork as well as considering a strategy for return to work.

If employers don’t have early intervention programs or sufficient internal resourcing, injured workers and managers are often left with limited support to navigate the return to work process. This is where Cogent Thinking can get them on the right track.

Cogent Thinking adopts a ‘Golden Hour’ methodology. We measure injuries on if they were reported and acted upon in the first hour of them occurring. This same stat is provided to our customers on how many of their injuries are reported to us within one hour.

Not surprising, injuries reported to Cogent Thinking in the first hour where they get access to first aid and return to work advice from an allied health professional soon after the injury occurring have better outcomes. People recover faster and can return to life and work sooner, fewer medical costs are incurred, and lost time is reduced.

Picture your average Friday night football game. On the side lines, there is a team of highly trained doctors and allied health professionals ready to help their football players (employees) should they get hurt. They get advice and treatment immediately. There is no waiting a few days to go down to their local GP who has limited training in musculoskeletal injuries and then receiving the advice to take two weeks off work, lie in bed, and have a (probably useless and over medicalising) MRI.

Cogent Thinking’s 24/7 Injury Hotline replicates this professional sport model. We have allied health professionals and doctors on the sidelines, ready to act, and advise as soon as we are called.

When I moved roles from working in Occupational Rehabilitation to working for Cogent Thinking, I discovered how powerful early intervention can be in getting injured workers back to work sooner. The 24/7 Injury Hotline that Cogent Thinking offers to employers demonstrates that when employers invest in their people and support them there will be better outcomes for the business and their people. This is backed by research, Comcare’s 2021 research into the best practice for early intervention programs recommended organisations to include a triage service like our hotline because early intervention is critical to helping employees with an injury or illness recover at and return to work.

Our partnership with Mercy Health is an example of how to get return to work right. Prior to engaging with Cogent Thinking and utilising our 24/7 Injury Hotline with their workforce every injured worker was making a claim at an average cost of $50,000. By working with us, Mercy Health has reduced its compensation claims by 97% and those that do make claims are now costing them an average of $5,000. The insurance premium has been significantly cut and they won the WorkSafe award in 2018 for ‘Leading Return to Work Practice by an Employer.’

So, what’s the final take away? Return to Work is an emergency. And if employers aren’t responding to injuries within the first 60 minutes of them occurring then they may need to re-think their approach and Cogent Thinking could be the answer. .